So awhile back, I bumped into this guy named Paul Hewson. Oddly, though, he called himself Bono. (I asked him if he was a big Sunny and Cher fan. He said he preferred loveseats in his sunroom. [I’m not sure I even get that joke. Think on it a second.]) Anyway, he was telling me how he was a singer or something. He told me how being in a rock band was so cool because he got to drink a lot of Guinness and shag chicks all the time. 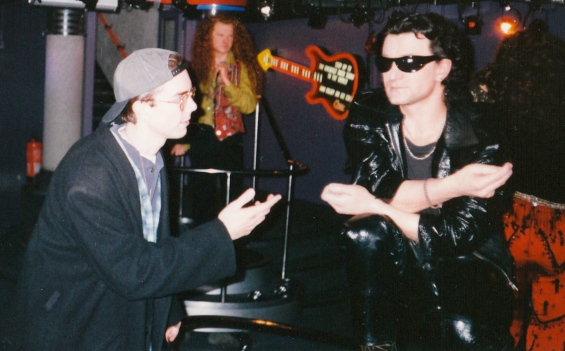 Me (left) chatting at Bono (right).

That’s when I told him, “Bono, no, you’re going about this all wrong. You have the power to help people. Get political. Take stances. Be obnoxious and talk about things that you really have no business being involved in. That’s what rock ‘n’ roll is all about!”

I wonder if he ever took my advice?

(I won’t even get into what I said to Mick Hucknall, lead singer of Simply Red. Notice him in the background of the photo above.)